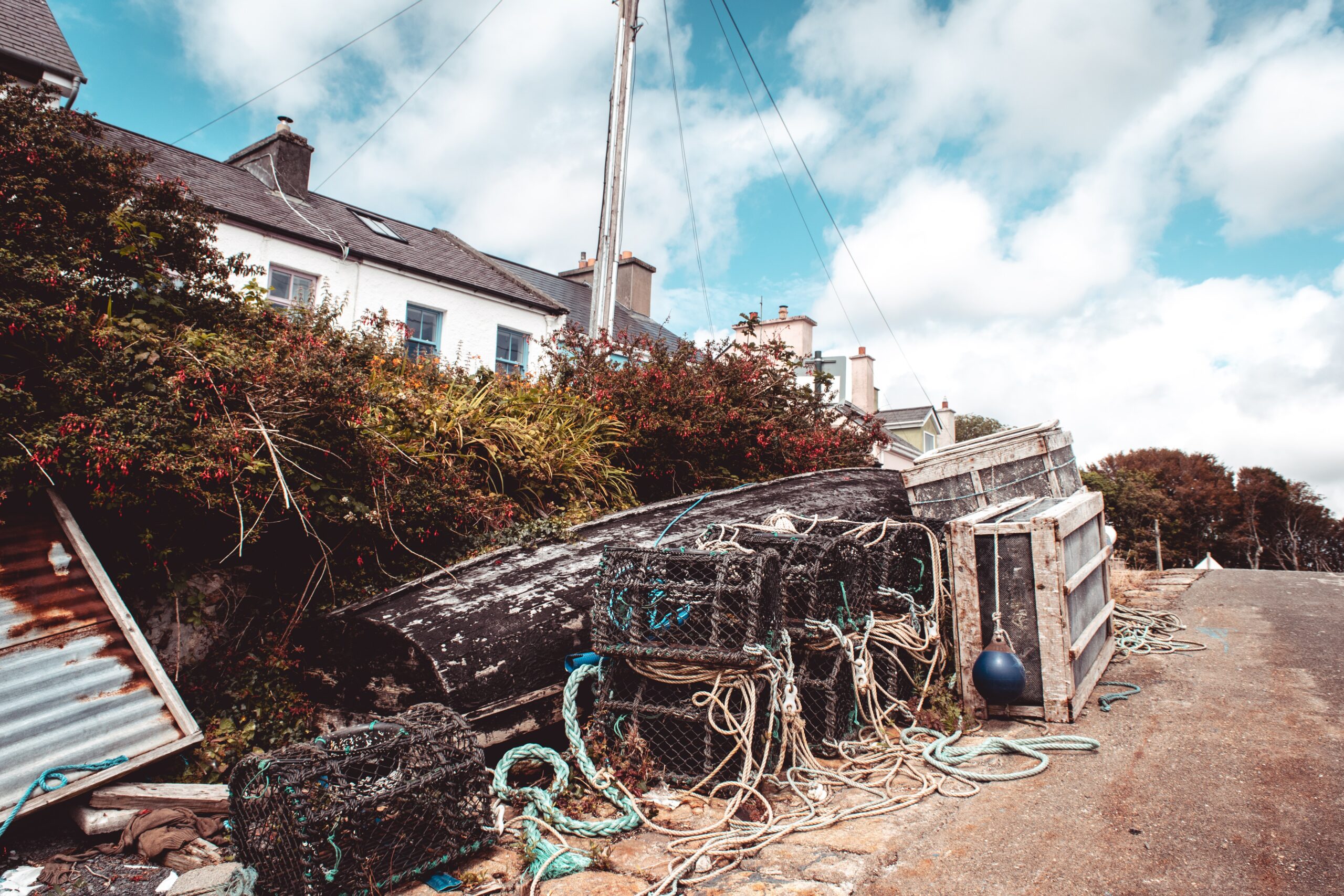 Photo by Nick Kane on Unsplash

Below is a brief round-up of news items from around the web relevant to the themes of the Blue Circular Economy (BCE) project.

An estimated 33,000 fishing nets are lost in selected European fisheries annually due to bad weather conditions, gear conflict, and ocean currents. Though some of this material is recovered by fishers who come across it at sea, much is lost to the vagaries of the ocean, drifting through the waves as so-called ‘ghost gear’. The problem is exacerbated because plastic pollution can travel thousands of kilometers in just a few months. One of the main aims of BCE is to help small and medium enterprises (SMEs) in the Northern Periphery and Arctic (NPA) programme area to reduce the scale and impact of this problem by using lost, discarded, or end-of-life fishing gear and components as materials in recycled or upcycled products.

Thankfully BCE is not the only project which recognises the potential for generating economic opportunity from end-of-life gear or recovered ghost gear, or the need to involve a wide range of stakeholders in order to ensure success. Alongside major cross-sectoral alliances such as the Global Ghost Gear Initiative (GGGI), many local projects around the world aim to deal with this problem including the Nova Scotia-based Coastal Action. In a recent interview, Coastal Action’s Alexa Goodman spoke about how important it is for projects like this to involve all stakeholders in actively tackling the issue of ghost gear and developing ways of reducing both its instance and its impact:

“I spent a summer working as a fisheries observer on Georges Bank, 12 hours off the coast of Nova Scotia, and learned about the local extent of ghost gear. The fishers talked about the expense of losing gear, and I discovered how much remains at sea in my postgraduate work as a researcher and private consultant.

Ghost gear retrieval is only possible with fishers’ expertise, community knowledge and [Canada’s] Department of Fisheries and Oceans.”

The full interview can be found here. If you’d like to know more about ghost gear and how the BCE project aims to tackle it, you can check out the programme and presentations from our recent conference – including a presentation from GGGI’s Joel Baziuk – at this link.

Ireland is to get its first ‘bottle-to-bottle’ plastics recycling plant in 2021. According to a recent article in the Irish Times, the Panda waste management company will build the centre at a cost of €20 million with the investment to create up to 100 jobs. The facility will process up to one billion plastic water and soft drinks bottles a year.

Speaking on a visit to one of the firm’s existing recycling facilities, Ireland’s Minister for the Environment, Climate and Communications, Eamon Ryan, called the new facility “a win for the environment, a win for jobs, a win for the region and an example of how the green economy can be a source of employment in the future”.

“As a nation we are becoming increasingly aware of the need to improve our performance with regard to sustainability, waste generation, plastics and the circular economy. The processing of plastic waste produced in Ireland and its use now to produce new products helps keep precious resources in circular use.”

Though the new facility will lie slightly outside the NPA region, its development illustrates the economic opportunities offered by plastic recycling and the shift towards a more circular approach to the design, use, and re-use of manufactured products. Though the recovery and recycling of waste fishing gear can be somewhat more complex than bottle-to-bottle recycling, the experience of companies in Norway demonstrates that economic opportunities are still to be found in this space which can also helping to prevent the further expansion of the problem of marine litter.

For the BCE project, this announcement is a positive development which will hopefully encourage other Irish businesses to explore the potential for using discarded or end-of-life plastic components in fishing gear as another source of recyclable plastic which can be re-incorporated into a circular economic model. This will in turn help to realise BCE’s aim of establishing innovative, sustainable clusters of SMEs engaged in such activity in Ireland, Norway, and transnationally across the NPA region.

To read Beauparc’s full statement about the new facility, as well as further information about their plans to develop a waste collection fleet powered by clean energy, check out their website here.

Earlier this month, European media website EURACTIV published a special report on plastic waste management in Europe. The report notes that the European Commission launched a circular plastics alliance in 2018 with an initial pledge of reaching 10 million tonnes of recycled plastics used in products by 2025 and asks: can the industry rise to the challenge?

With articles about differences in rules across the EU, the price gap between virgin and secondary plastics, and upcoming requirements for companies to ensure minimum levels of recycled plastics in their packaging, the report will be interesting reading for many BCE followers and anyone interested in generating new and sustainable businesses opportunities in the context of the EU’s push to reduce plastic waste.

In addition to the individual articles on the EURACTIV website, a PDF version of the entire composite report can be found here.

The ocean gave up another of its secrets this month when a group of German divers on assignment for the World Wildlife Fund (WWF) recovered a WWII Enigma code machine while searching for lost fishing gear. As reported by Agence France-Presse via the Guardian, the machine – which was used by the German military to send coded communications during the conflict – was discovered in a fishing net on the seabed in the Bay of Gelting.

The cracking of the Enigma coding system was only successful thanks to a great deal of scientific and technical effort, an intense level of intellectual labour and commitment, and a little educated guessing, all carried out by a relatively small group of people determined to find a solution. The same spirit will be needed to help solve the problem of plastic pollution, in the marine environment and more generally, in the coming years.

You can read the WWF’s statement (in German) about the Enigma discovery here.

The ocean accumulates waste in all forms. Much of the waste does not break down, which presumably makes the ocean the world's largest landfill.

Conference Close for the BCE-project

And that’s a wrap! A happy team (pictured) after a successful closing conference of the BCE-project in Ålesund on March 29th 🤩 (fotograf: Børge Sandnes)