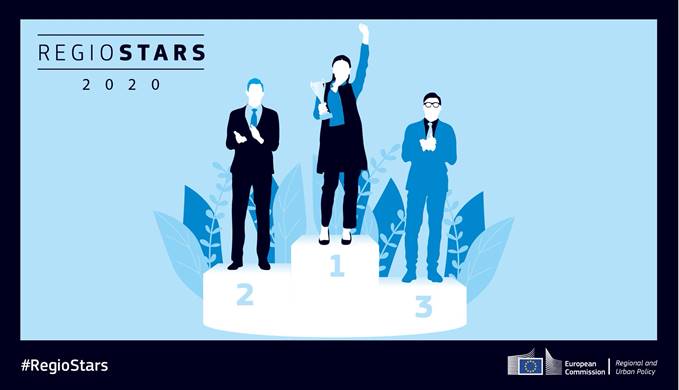 Thanks once again to all those who voted for Blue Circular Economy (BCE) to win the Public Choice Award at Regiostars 2020. This year’s award was won by Time is Now for Change, a wonderful project based in the cities of Alytus (Lithuania) and Elk (Poland) aimed at working with and supporting at-risk youth in their shared border region. This project did extremely well getting 8,300 of the more than 33,000 votes cast in the competition, and you can view the winner’s Regiostars video here.

In BCE’s category Circular Economy for a Green Europe, the award went to Cool Food, an Interreg France (Channel) England-funded programme for their project ‘Take the Cool Food Challenge’. This aims to help people reduce the level of carbon emissions they produce by making small changes to the way they shop, cook, and eat, and you can see their project video here.

Winners were announced on the evening of 14 October at an award ceremony as part of EU Regions Week. The ceremony was streamed live from Brussels with project leaders from around the EU participating via video link. Six European Commissioners hosted the event remotely, including:

Commenting on the importance of all the projects in the context of EU Cohesion Policy, Commissioner for Cohesion and Reforms Elisa Ferreira had this to say:

“I want to warmly congratulate the best EU Cohesion policy projects of 2020. Project beneficiaries are the stars of the EU Cohesion policy because they are the ones making our mission a reality, that is to say, an EU more fair and cohesive, ensuring convergence across living standards and increasing everyone’s wellbeing. The REGIOSTARS Awards show that we can achieve excellent results when the EU, Member States, regions and cities work together for the best use and implementation of EU funds and projects.”

With such impressive projects for company, the BCE team is honoured to have been a finalist at the awards, especially in light of the record number of entries with 206 projects in total of which 54 were in the Circular Economy category. The awards also provided BCE with great visibility on the European stage, and gave us a chance to showcase the excellent work being done by the project as well as our plans for the future.

During a presentation given by category finalists on 13 October, the ultimate aim of the project was outlined by Siv Marina Flø Grimstad, Associate Professor in the Department of International Business at the Norwegian University of Science and Technology (NTNU):

“Through the Blue Circular Economy Project, we are driving innovation by bringing together a wide range of experts and stakeholders to solve a problem that persists in even the most remote parts of Europe and the Arctic region. By connecting researchers, NGOs, and municipalities with the public, we are developing and delivering novel solutions which turn marine plastic waste – fishing gear – into a resource for new businesses.”

“The remote areas that were are focusing on often lack the infrastructure and expertise to make a positive change. By identifying and developing the multi-level clusters in the west of Ireland and north-west Norway…we hope that with our project we will produce a sustainable solution [to the problems posed by waste fishing gear] in these Arctic areas.”

A playlist featuring all of the project videos for each category winner can be found on the EU in My Region YouTube channel.

If you’d like to check out the video from the Regiostars finalist web session featuring Siv Marina Flø Grimstad, you can find the recorded version here. If you didn’t get a chance to tune in to the award ceremony, a recorded version which includes reaction from the winners is already available via the EU in My Region Facebook page.

The ocean accumulates waste in all forms. Much of the waste does not break down, which presumably makes the ocean the world's largest landfill.

Conference Close for the BCE-project

And that’s a wrap! A happy team (pictured) after a successful closing conference of the BCE-project in Ålesund on March 29th 🤩 (fotograf: Børge Sandnes)